As promised, this week I'm including some shots of the woodpeckers we saw while hiking last weekend. Taken at Lemoine's Point...probably our favourite place to go hiking! I believe they are all Downy Woodpeckers, except the last one, might be a Hairy Woodpecker...

I'm thinking I should take my camera with me in the morning when I walk the dog---this morning I saw 3 wild turkeys in my backyard...very cool. They didn't stick around long when they heard Zeek's dog tags! I don't blame them! Most mornings we see rabbits, but I haven't seen any babies yet!

Well, we had a busy weekend with shopping for a Prom Dress in the USA...We were just going to go to Watertown, but ended up going to Syracuse..it was a LONG day, but she found a pretty red dress, so all is well!

This weekend we are scheduled to go to Ottawa for a visit with our friends..I'm looking forward to it as we haven't seen them since Christmas!

I'll probably have some pelican shots next week! 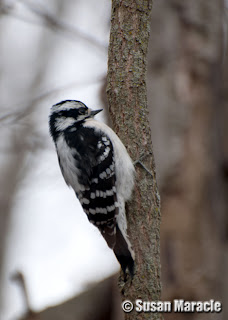 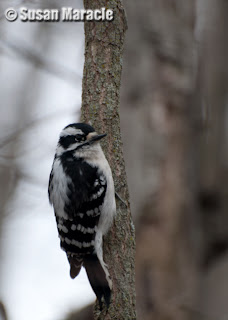 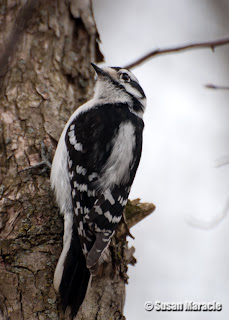 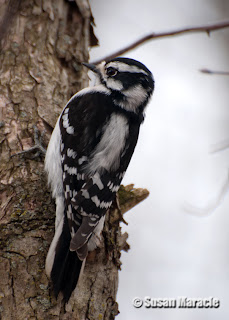 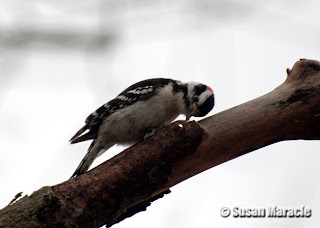 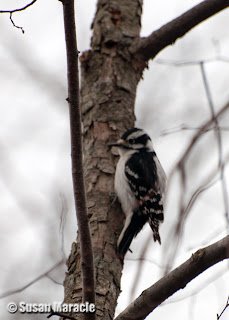 This week I'm giving you a reprieve from the pelican photos!

Yesterday we went hiking at Lemoine's Point and we figured our normal trail would be muddy, so we took another, more groomed trail..the one close to the Kingston Airport.

Anyway, it was overcast and we were not seeing much of anything, other than a couple of the usual birds, when it started sprinkling. We started to head back and we heard a woodpecker pecking like crazy and so we stopped to listen to it, to figure out what tree it was in, when I saw something move in the bushes. It was this cute little deer..he/she was quite small...probably last year's model.

Anyway, Kevin was shaking his baggie with the sunflower seeds in it and the deer actually started coming closer! Wow, that never happens! Keturah had picked Zeek up, so the deer didn't seem afraid of us at all. Another guy that stopped as well, was tossing crackers at it, but it didn't eat them. Kevin threw some seeds for it and it would look for them in the leaves!

He actually came right on the trail looking for seeds that we had left earlier for the birds! It was so cool. I was afraid to move in case I scared him off.

Of course, while I was shooting the deer, there was the noisy woodpecker, right at eye level beside me on a branch trying to get my attention. I did manage to get some good shots of it, so guess what I'll post next week! :-)

As we were leaving we saw the 6 deer in the last photo crossing the trail. We were quite far away and by the time we got up to where they had crossed the trail, they had already disappeared into the bushes. 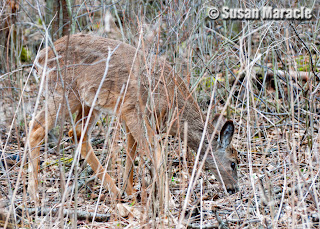 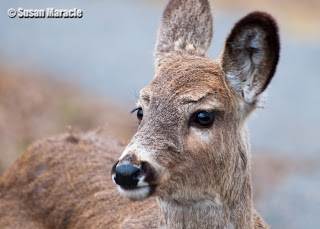 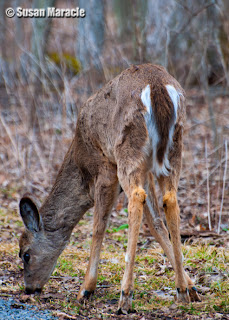 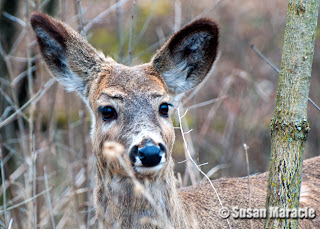 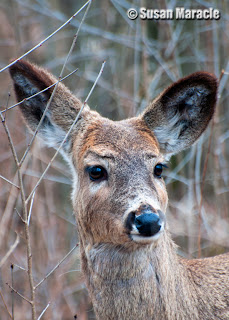 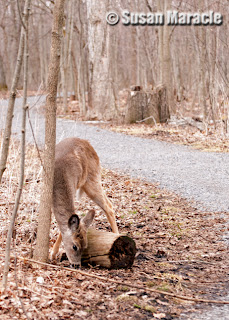 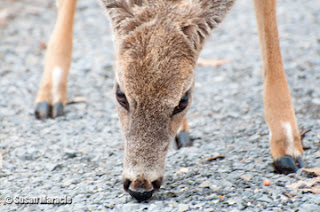 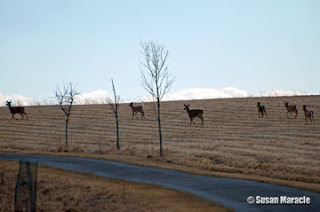 This week I'm highlighting some feathered friends from Murrell's Inlet in Myrtle Beach. This is a favourite nature area of ours as we always see some kind of wildlife. This time I saw a few pelicans and you know how much I adore them!

I thought I'd start my pelican retrospective with some flying ones. I am not sure I've ever included flying ones before--maybe one, but this time, they were quite active, so I managed a few that I was happy with.

The sixth picture is that of an island just out from the boardwalk. I think you can canoe over there or if the tide is low enough you could probably walk! Anyway, there were a bunch of pelicans sunning themselves on this island.

The seventh picture is that of a fisherman who was checking his nets with a lot of inspectors (pelicans) standing by. He did throw some fish at them..likely ones that were too small for his taste. It was cute watching them follow the fisherman around...I figure he must do this every time to have such a following!

Have a good one! 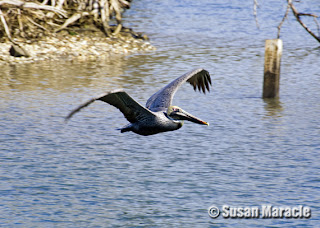 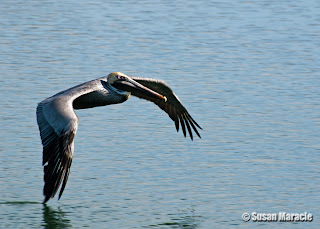 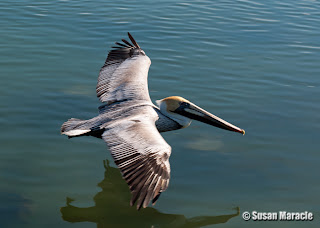 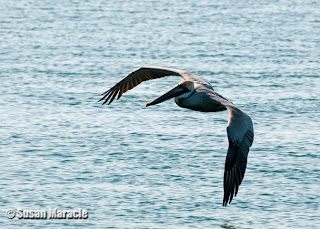 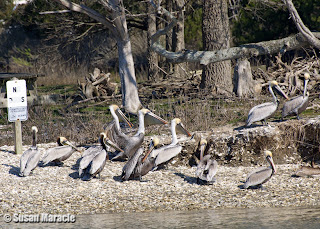 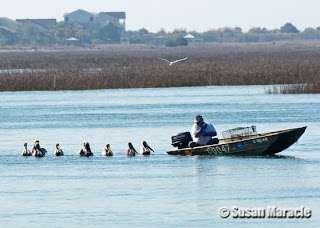 This week I'm starting to highlight the vacation photos! I thought I'd start with these birds I shot (with my camera)!

Some were taken in North Carolina...We took a drive "north" to go to this cool gift shop called "Callahan's of Calabash". We go there every year. On the way, there is a fishing marina-type area where you can walk on the docks and check out the catch of the day or in our case, these birds. Last year we saw quite a few pelicans in this area, but we didn't see any this year. We did see the Egret and the Heron there.

The other photos were shot at Murrell's Inlet...You can tell I was getting desperate to shoot something, as I took photos of cormorants and a sea gull! I threw in a duck photo as well (I think it's a bufflehead)....We did see some pelicans and I got quite a few shots, but I still have to go through all of them, and I didn't want to start it tonight!

As it was, my computer was threatening to restart on me (after updating)...it gave me a 4 minute warning and I waited and waited, but nothing happened, so I hope I get this typed, saved and posted before it resets on me or I'll be one miserable blogger! :-) 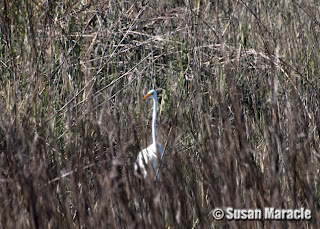 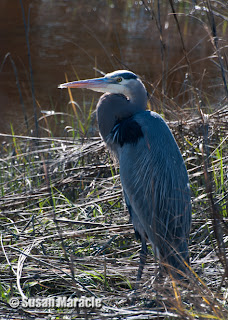 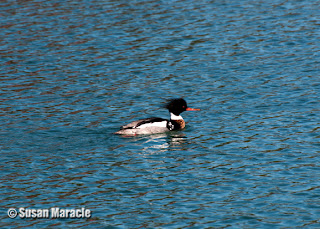 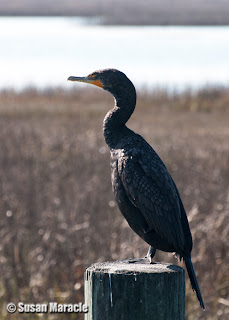 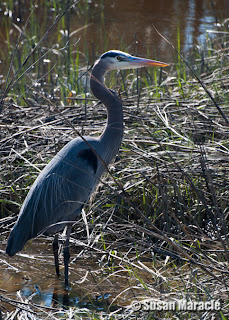 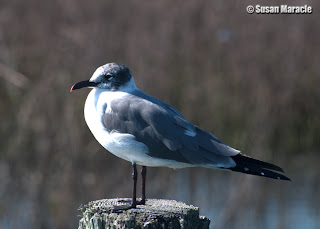 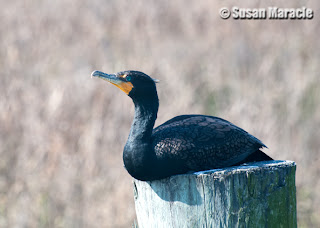 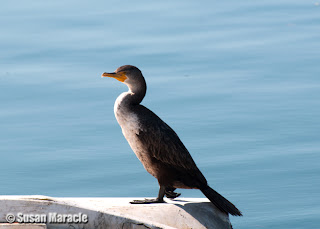