I'll keep this short today as I'm sick with a head cold..thanks to my darling daughter for sharing her germs with me!

Here are some scenics taken along our journey through NB and PEI.
1st-St John River-taken while we were standing in the middle of the Hartland Covered Bridge
2nd-New Argyle Beach-taken because of the light
3rd-New Argyle Beach as the sun was setting
4th-East Point Light House-taken at the lookout beside the lighthouse
5th-Cavendish Beach-love that red sand
6th-Cavendish Beach-love that view

Travel Tip: I ALWAYS take a journal with me when we go on long trips, so I can remember what we did each day as well as the names of the beaches (in this case) or any other sites that we visit! It really helps me with this blog and identifying my thousands of pictures I take too!
Enjoy your week! 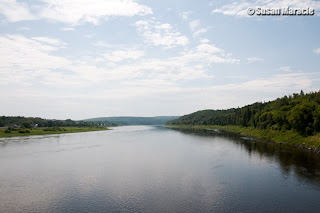 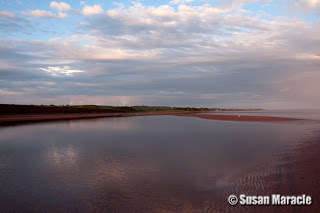 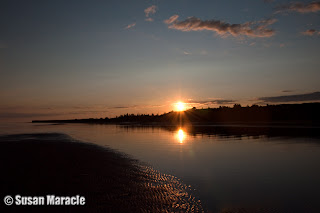 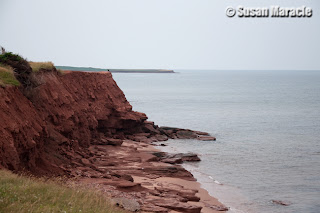 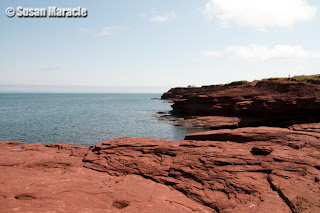 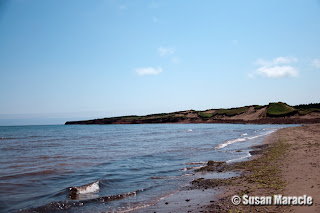 Here are some shots from a place called "The Bottle House of PEI". Here's a bit of history:
Over 25 000 recycled bottles ingeniously cemented together to create the Bottle Houses, a must-see tourist attraction situated in Cap-Egmont, Prince Edward Island, Canada. They were built by the late Édouard T. Arsenault. He gave birth to these houses after having received a postcard of a glass castle from his daughter in 1979, an attraction she had visited on Vancouver Island in British Columbia. That same summer, he started collecting bottles from his community, mostly from a local restaurant, community dance halls, friends, relatives and neighbours.
He spent the winter in the basement of his home, cleaning bottles, removing labels and dreaming of his project. In the spring of 1980, at the age of 66, he began his construction, a mere hobby yet. As his six-gabled structure was taking form, visitors started coming in. Impressed by his work, they encouraged him to continue and to advertise it as a tourist attraction. And so, in 1981, the first Bottle House was open to the public.

From 1980 to the spring of 1984, he cleverly cemented over 25,000 bottles of various shapes, sizes and colours, into three fantasy-like buildings.

The site offers a multitude of angles for the photographer to capture the wonder of what an individual built out of recycled bottles. It is also truly an inspirational spot for anyons who cares for the environment. 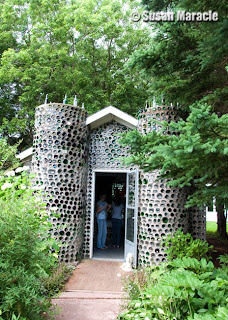 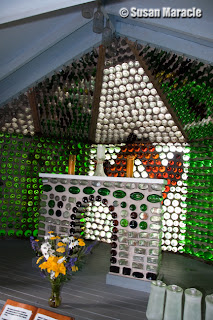 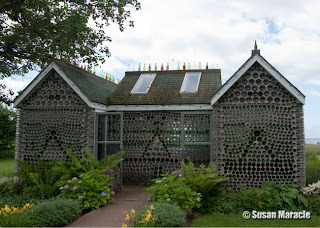 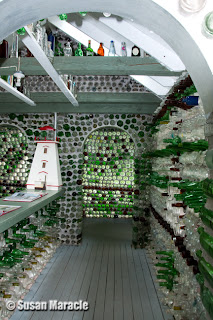 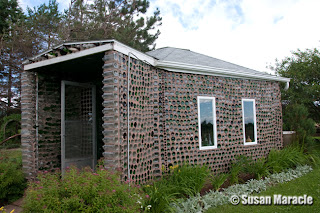 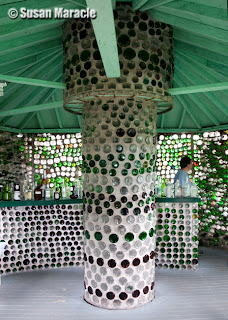 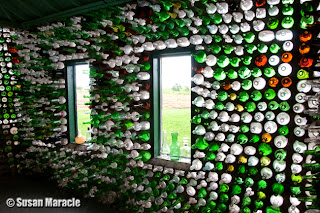 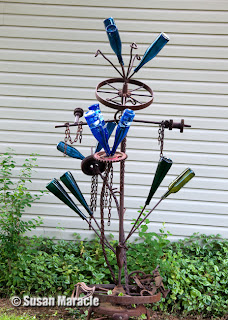 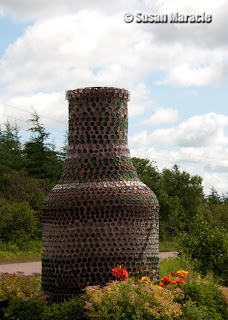 As promised, here are some more lighthouse shots from PEI and NB:
1st Pic-North Point Lightstation -this one was found at the most northern tip of PEI
2nd Pic-Tignish Run Lighthouse-theres a nice beach here and cafe
3rd Pic-Indian Head Lighthouse (near Summerside)-this one was out in the water, but you could venture out on those rocks if you dare! We didn't! It was getting dark and the kids were back at the hotel, so we didn't stay long.
4th Pic-St. Stephen, NB-I'm not sure if this one was real or just for show!
5th Pic-Pendlebury Lighthouse-St Andrews, NB-It is being renovated at this time.
6th Pic-East Quoddy Head Lighthouse, Campobello Island, NB-Saw this while on the whale watch cruise!
Well, that's it for Lighthouses..not sure what I'll include next time--maybe some scenics and/or red beaches!
Have a great week! 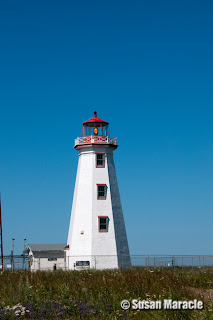 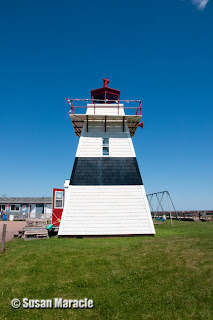 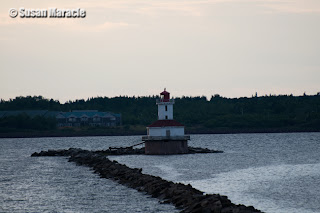 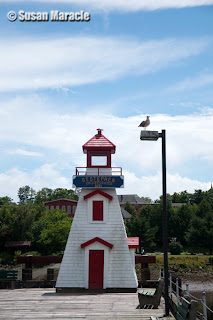 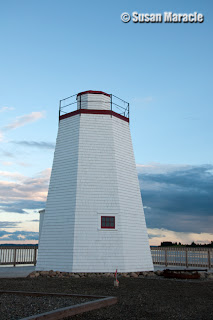 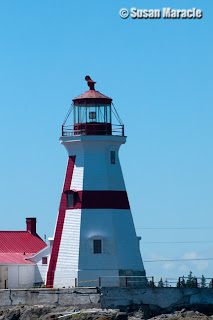 Posted by Susan at Saturday, September 10, 2011 No comments:

This trip down east saw us searching for and visiting lots of lighthouses (the kids groaned whenever we mentioned there was another one on the map!) I loved shooting them with my camera-- as you can see below, no two are alike and the sky ends up being different in all of them as well--depending on the weather that day (or should I say minute- as the weather is known to change quickly there).
These are a portion of the ones I shot in PEI-- from one end of the Island to the other. We even toured through a few of them as well..yep all the way to the top..the stairs really hurt my calves as they are fairly steep!!
1st pic-Victoria Seaport Lighthouse (a fairly small one)
2nd pic-Panmure Head Lighthouse (the beach nearby had the ninja crabs)
3rd pic-East Point Lighthouse (giftshop and cafe here too)
4th pic-Shipwreck Point Lighthouse (in the middle of nowhere and kind of plain looking!)
5th pic-Cape Egmont Lighthouse (love the sky and weather this day!)
6th pic-West Point Lightstation (& hotel-you could sleep in this one, but it was full when we were there!)
I'll add more next time with a couple from NB too! 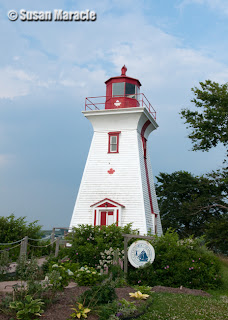 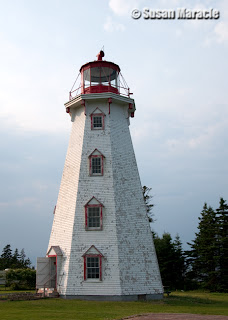 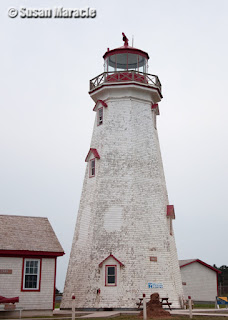 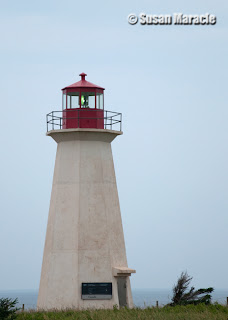 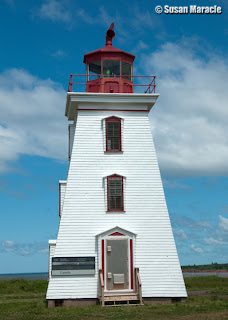 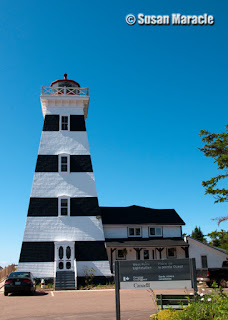